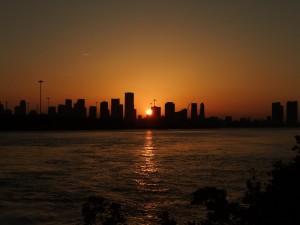 As the sun tries to break through the clouds on my last day in Miami it’s time to try and reflect on an awesome week. It seems like a lifetime ago that I landed last Sunday and made my way, in typical unfamiliar, tourist fashion, to my hotel.

Tuesday afternoon was my last post so I better try to document proceedings from then on. The first person I met at the conference registration was Dave Payne, from Loughborough of all places! We met up in Cameo that night for the Defected in the House party which was a great kick off to the week. Riva Starr and David Penn tore up the main room.

On Wednesday I caught the first couple of hours of the DJ Mag Pool Party at the Shelborne Hotel before heading off to a invite only party that I managed to get on the guestlist for. Nic Fanciulli really got the DJ Mag party going in the early afternoon and I had to tear myself away for this other party.

After I left the Shelborne I started to question whether I had made the right call but I my fears were soon alleviated after being picked up in a plush mini bus and meeting a few cool people enroute to the party. I won’t say too much about the party itself, it was a pretty unique experience – how the other half of Miami live – think yachts, lots of cars, money on show and a unbelievable buffet (think Vince Vaughn sampling food in Wedding Crashers – that was me).

Thursday kicked off at the Shelborne again for the Luciano / Loco Dice pool party, I heard murmurs in the queue that it was the best of all the pool parties last year. Again I could only stay a couple of hours as this time I had tickets for the Cosmic Gate & Friends Yacht Party. I had to travel downtown to the port area to catch the boat but as soon as I got there I knew it was all worth it.

From start to finish the party was amazing, Wippenberg and Cosmic Gate had the whole boat jumping up and down and the shared vibe of everyone on board was one of insane enjoyment. I spent the last 45 mins of the party on the top deck taking in the downtown skyline by moonlight – incredible.

The Ultra Music Festival began on Friday at 4pm so after a lazy morning I headed downtown to Bicentennial Park. There were hundreds upon hundreds of people waiting for the festival to open when I arrived with a few policemen trying to maintain some sort of order, that being said it was very quick to get in after the gates opened.

I managed to catch Eric Prydz in the Ibiza tent, David Guetta on the main stage and Carl Cox closing his own tent, the latter being far and away the highlight. Cox played a 2 hour closing set and every time you thought it couldn’t get any better, he would crank it up a notch. I was starting to get quite warm in his tent but then I started getting blasted by some sort of nitrogen jet that spat out a plume of ‘smoke’ and provided a beautiful breeze of cool air. Getting home that night proved quite difficult but it couldn’t detract from a great night.

Saturday was a day of mixed fortunes. I met Dave at his hotel and we tried (more than once) to make our way to Day 2 of Ultra. The traffic was horrendous and we jumped out at 5th & Washington and I convinced Dave we should stroll to the bridge and get some photos of the sunset over downtown (see above). To cut a long story short we walked the whole way to Ultra and got to see the Swedish House Mafia’s set which was awesome – we were both very glad we made the walk!

I headed down the Beatport Beach Party on Sunday for a little while, it was cool but I started to get the feeling I was done with the incessant pounding of my ear drums. I spent the rest of Sunday on a little ‘gastro tour’ of South Beach and walking along the famous Ocean Drive.

Wow, monster post. Well that’s it Miami, it was a brilliant week but now I’m off home for Easter weekend, some home cooking and maybe a little bit of sleep.