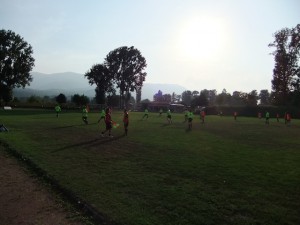 Game against Conegliano FC, we won 7-2

What a crazy week. I got back from Bulgaria a couple of days ago where I was on a pre-season football tour with my local (amateur) club, Nottingham United. We had what can only be described as an incredible week, playing a LOT of football against semi-professional teams and having fun along the way. Oh and we might have quietly played against a team (Vitosha FC) featuring the Bulgarian Prime Minister.

The quality of football was fantastic and despite only winning a couple of games it was a great experience to play against top quality teams, including the CSKA Sofia U17’s and a side of CSKA legends, some of whom played against Nottingham Forest in the European Cup in the early ’80’s. As well as playing against the Prime Minister and his team, we got to meet Dimitar Penev (the coach that led Bulgaria to the semi-finals in World Cup ’94 and a player in the ’66 World Cup) and play twice in the Bulgarska Armiya Stadion – the old CSKA stadium (see below). 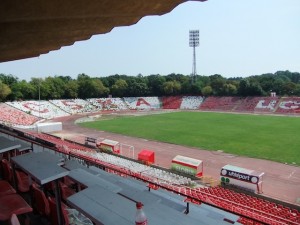 Bulgarska Armiya Stadion, taken just after our game against the CSKA U17's

The game against the Prime Minister probably deserves a couple of paragraphs given the media attention it attracted so I’ll summarise the day in brief. Contrary to certain media reports (!) we actually weren’t out the night before as the majority of the team had to be up and out of the hotel for 6.45am for a trip to the Rila National Park. The reward for such an early start was a chance to take in some breathtaking scenery during a 3-4 mile guided walk. Kick-off against Vitosha was at six so after getting back from the walk I rested up for a couple of hours before jumping on the bus with my headphones in. We’d heard a few weeks previously that the PM might play against us but I’d taken it with a pinch of salt until I saw him declaring he was going to score against us in the morning press and Martin (our Bulgarian Assistant Manager) confirming he was no. 13 while we were warming up.

I played the game much like any other (it didn’t really sink in till I got home) and I put in a hefty challenge on the PM in our box after he went round one of our defenders and was about to score. A strong, fair challenge I thought, alas the ref didn’t agree and amidst animated protests from my team mates, a penalty was awarded. Vitosha went 1-0 up and didn’t look back, running out winners 6-0, after two more penalties were awarded, one of which our Latvian goalkeeper Martins, saved brilliantly, making the PM wait for his goal which came with the last penalty.

A media furore ensued. One of the lads mentioned the game to his girlfriend while on the phone on the bus back to the hotel, who in turn mentioned it to a contact she had at the Sun. The next day our manager Mark found his phone ringing every 5 minutes with calls from journalists and I was also put on the phone for my take on the game with PM. The front page of Bulgaria’s biggest sports newspaper that day had a picture of my tackle on the PM that gave away the first penalty and I was handed a phone the next morning to do a live interview on Radio 5 Live! I’ve since returned home to find a full page story of our tour in the Sun newspaper and friends on Facebook commenting on the story.

I’ll wrap it up there. Credit goes out to Mark, Martin and the rest of the management team at Nottingham United for organising such a fantastic tour, apparently we’re off to Italy next year – if it’s half as good as Bulgaria everyone involved will be in for a great time. Also a shout out to all the lads that went, I had a great time with you guys and I’ve got high hopes for the upcoming season.

My next adventure – Sierra Leone in just over a month for the new Tribewanted project – that is shaping up to be another experience I’ll never forget.