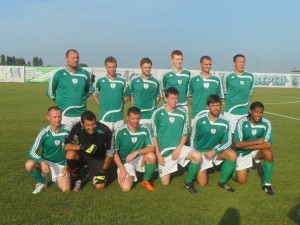 I thought I’d post up a quick review of the football tour I went on with Nottingham United FC earlier this month. In short, we had a great time.

Despite the lack of a high profile game involving the prime minister this year, we got to play against two ‘legends’ sides from CSKA Sofia & Levski Sofia (full of ex-pro’s), drawing 3-3 against both, in a couple of thrilling encounters.

Our result of the tour was beating a young and talented Conegliano side 4-3 in a fantastic game (a far cry from the team of old boys they put out against us last year!).

A view from our hotel of the Bulgarian coastal town Primorsko.

Rather than just staying in Sofia this year, we also travelled to the coast for the latter half of the tour. The long cross-country minibus journey was worth it once we arrived in the pretty little coastal town of Primorsko.

It gave us a chance to see another part of the country, hit the beach and chill out a little bit before playing a few more games. 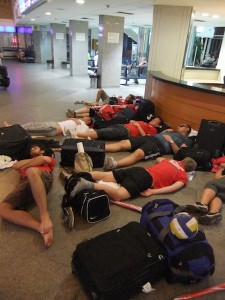 The tour taking it's toll before the flight home.

The footballing schedule wasn’t as gruelling last year (we even had some days off!). A little bit more rest and some experience of the conditions noticeably helped our performances, tactics and results! (11 a-side results: 4 wins, 2 draws and 3 losses – improving considerably on our solitary win last year).

Thanks go out to the club management, physio and my fellow players for making it another great trip! If you’re interested in finding out more about Nottingham United, you can visit the club website here.