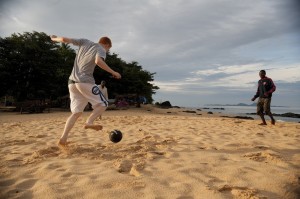 10 years. I’m told shortly after we arrive in Sierra Leone that we’re the first group of tourists to visit for a decade. Tourism has been on an extended hiatus because of the war and its associated blood diamonds that have damaged the perception of the country so severely.

So, what do you find today if you visit a country that many rank as one of the poorest on the planet? You find beauty, unspoilt natural beauty. It’s true that the capital, Freetown, is a ‘city’ with a worrying lack of infrastructure and overcrowding but once you reach John Obey Beach, the home of the TribeWanted Sierra Leone project, it’s a different world.

We arrived late on Friday night after battling through the throng of people at Lungi airport, taking a boat ride across to the east of Freetown and driving 45 minutes south down the peninsula. The tents were slow to go up in the dark after a long journey and we all chatted briefly round a small campfire near the ‘beach kitchen’ before turning in for the night. 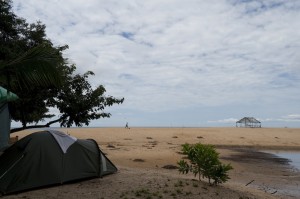 A view of the beach at John Obey. Another photo courtesy of fellow Tribe member Susan Braun - braunphoto.com

I unzipped my tent the next day and got a first look at the beach stretched out in front of me. Despite the cloudy start to the day, the sun was soon out and we celebrated the opening of the project with our neighbours from John Obey village under the sunshine. There was a formal introduction to the project shortly followed by singing, dancing, drinking and a beach football match. We enjoyed food and drink together as a community and there was a real party atmosphere.

During our time here we are learning the local krio dialect and visiting parts of the local community, as well as helping with some of the construction tasks around the TribeWanted site.

We walked up to John Obey village a couple of days after the opening celebration and were welcomed with warm smiles and handshakes. The guys in the village said they feel happy and privileged to share their community with us, one man tells me: “We are happy when we see the white man here, it shows that there is peace, the war is long over and now we need to look forward to the future of Sierra Leone”.

One week in and life is good, the project is moving along nicely, the hammocks are up and all the tribe members are very much enjoying their stay so far. I look forward to another week in paradise.